A planned outage was required to replace one of four alternator units, each weighing in at 150 Tonnes.  This lifting procedure would require a tandem lift from the two existing overhead cranes with precise speed matching of each crane.

In advance of the planned lift, a full overhaul of the crane’s mechanical parts, gearboxes, bearings and brakes was required.

Taurus Cranes MD, Anthony Purves contacted Drive Solutions Centre partner Newton Tesla to carry out the works, which included an inspection of the existing motor control systems, which had barely changed since the power station was built in 1973.

Newton Tesla identified the existing controls would not provide close enough ‘speed following’ and ‘torque sharing’ between the two cranes.  George Newton, MD, Newton Tesla explains, “The two cranes had a complicated arrangement of resistor control and eddy current braking to the motors to achieve ultra-low speed but could not be relied upon for this important lift”.

The obsolete equipment was removed and replaced with a Mitsubishi A840 inverter control system; whilst continuing to use the existing motors.  This greatly improved the speed and position accuracy and the ability to load share between the two cranes as they traversed the turbine hall.

Mitsubishi Electric’s A840 inverters are ideally suited to crane applications due to their high overload capacity and built-in brake lift sequencing macro.

With the new drives installed, a new purpose built lifting beam was manufactured to couple both cranes to the load, to enable the lifting operation.  Anthony concludes, “With the help of George and his team at Newton Tesla/DSC, the tandem lift went exactly as planned with the works completed safely and ahead of schedule”  With the new drive system in place the two cranes can now operate reliably for future large lifting operations. 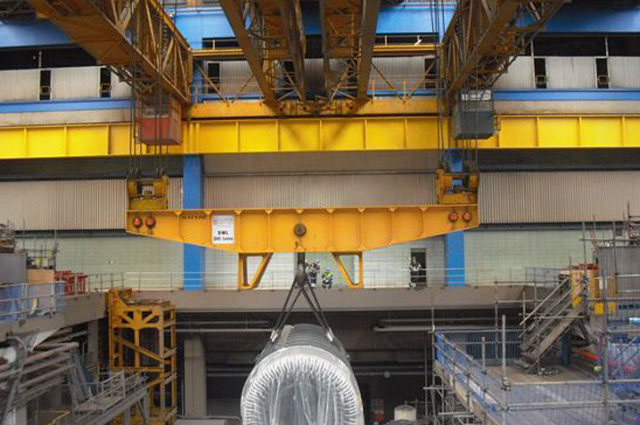